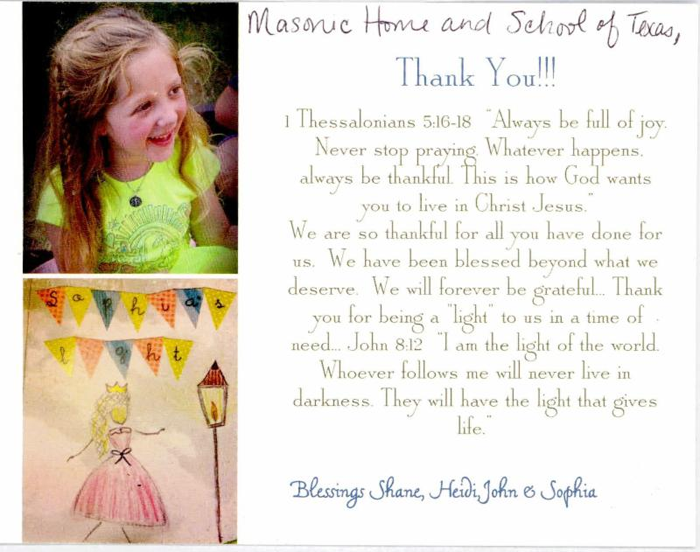 Sophia’s Wheelchair ~ Sophia is a brave warrior who has battled more in her 8 years of life than most people battle in a lifetime. She has NFI, long QT, an immune disorder, hip displasia/erosion and the list goes on,” Sophia’s mom, Heidi explains.

Masonic Children & Family Services of Texas became involved in Sophia’s story when the family was faced with a large insurance copay for a wheelchair their precious daughter absolutely needed. Without an option to make payments toward the purchase, Sophia’s family was referred to MCFS by Scottish Rite Hospital.

We were able to alleviate the financial burden and get Sophia on the move in her new wheelchair.

“As a family, we have never let those diagnoses describe Sophia. Instead teaching our children that through us, God can accomplish anything.”

“Without your help Sophia would not have been able to get a wheelchair. MCFS has not only helped get Sophia what she needs, but has lifted a load of worry off of our shoulders. This has been an amazing blessing to Sophia and our family.”

Stories like Sophia’s are reminders that the role Masonic Children & Family Services of Texas plays is so important.

You can be part of our life-changing mission by DONATING today.